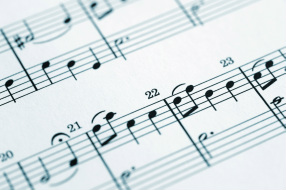 
The Exeter Forum's  Music Appreciation Group meets monthly in a member's  home, usually on the last Monday of the month.  At each meeting a programme of music is presented for those attending to comment upon.   Usually the pieces selected will follow a common theme.   Recently the group has been trying to widen the fields of music that we have heard and discussed.

Lately there have been programmes of more popular pieces such as "The Lamb that lay down on Broadway" by Genesis , some Folk Music and singing by Alistair,  and musicals such as Les Miserables, and West Side Story. At the next meeting we had Jazz in the first hour and Classical Guitar to follow.

At a subsequent meeting a fascinating collection of African Music was played, followed by three pieces by 20th Century composers, all in the popular serious repertoire.

More recently the Group heard about the late development of music in Russia, due largely to limitations by the Orthodox Church. Music from France and Italy appeared gradually during the 18th century, but it was not until the 19th century that recognisable Russian compositions came to be heard. After 1856, when the Moscow Conservatoire was established, there was an explosion of music, much of which is enjoyed today.

We heard CDs from Glinka, who composed the first truly Russian opera, then Borodin whose String Quartet No.2 as well as his Polovtsian Dances were famously adapted for the stage in 'Kismet'. Mussorgsky's original piano version of 'Pictures at an Exhibition' completed the first half of the programme.

The second part started with Tchaikovsky's melodic Violin Concerto then Rachmaninov's stunning 'Rhapsody on a Theme of Paganini' and concluded with part of Prokofiev's 'Classical' Symphony.

At another recent meeting members enjoyed a slection of music from seven composers who ventured beyond their home country.

Handel (1685-1759) made two visits to England and experienced the operatic world of Italy, before settling in the U.K. and eventually becoming a British citizen. We heard some of his Water Music, composed supposedly as an apology for overstaying his absence from his employer in Hanover who had become King George I of England.

Mozart (1756-1791) was hawked around Europe as a child by his father and famously played for King George III. Visits to Rome and Paris were complemented by one of a number of successful stays in Prague where he gave the first performance of his opera 'Don Giovanni'.

Haydn (1732-1809) was brought to England by the impresario Salomon in 1790, following the death of his employer in Esterhazy, and another successful visit was made in 1795 when his final (London) symphony was performed.
Mendelssohn (1809-1847) came to the U.K. ten times and met Queen Victoria and Prince Albert on several occasions. In addition, he visited Italy where the Influence of the Neapolitan region sparkles in his Italian symphony.

Tchaikovsky (1840-1893) preferred the culture of St Petersburg and the folk music of Ukraine. He also visited Rome and the influence of that city can be heard in his Capriccio Italien.

Although Dvorak (1841-1904) composed works for a number of English festivals and visited England nine times, it was the invitation to leave his native Prague and become Director of the National Conservatoire of Music, New York for three years which was more famous. During that successful period in addition to chamber works, he produced a symphonic work which captured sounds he experienced in the New World.

We finally heard a masterpiece by Rachmaninov (1873-1943) who waited seventeen years following his self imposed exile from Russia after the 1917 revolution. He found composition during those years difficult and spent much of that time as a concert pianist in the U.S.A. before moving to Switzerland. Taking the 24th Caprice by Paganini, he produced a Rhapsody containing his much loved variations.
New members are welcome. Come with your ideas. We can often help in finding the relevant CDs or DVDs