HINT FOR WEBSITE USERS:  To find out more about Forum's activities hover your cursor over the tabs above and explore the drop-down menus that then appear. 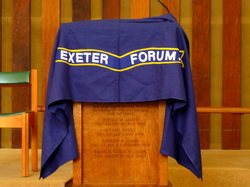 The main activity of the Exeter Forum is its weekly programme of talks.   These take place at the Mint on Fore Street, Exeter every Wednesday.   As can be seen from the  programme set out below, the subjects covered are wide ranging.  Speakers are invariably stimulating and entertaining.   Non-members are welcome to attend these talks subject to a modest charge of £3.

The talks programme until Easter 2023 is given below:

Wednesday 8 February 2023
Dr John Salvatore
What the Romans did for Exeter!

Wednesday 15 February 2023
Charlie Courtenay, The Earl of Devon
Exeter and the Earls of Devon – frenemies for a millennium

Wednesday 22 February 2023
Derek Gore
The Kingdom of the Dumnonia

Wednesday 1 March 2023
Professor John Bryant
Human Genetics – what’s Ethics got to do with it?